Here are photos of all the modifications and the work we’ve put into the car from June 2011 onwards. 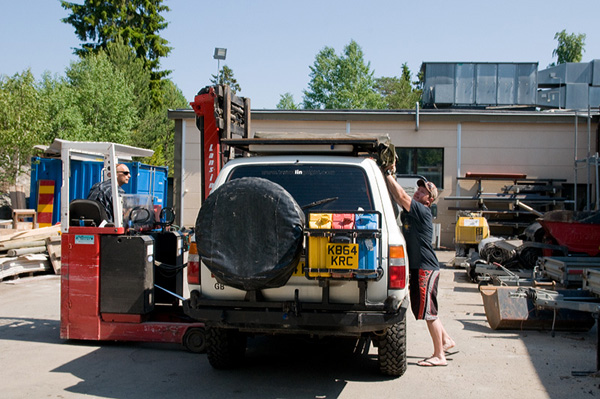 We started by taking the roof rack off. Slightly scary project, but it went perfectly fine. It had to come off partly so we could do some adjustments and maintenance on it, but also because we wouldn’t be able to get the car into the garage otherwise… 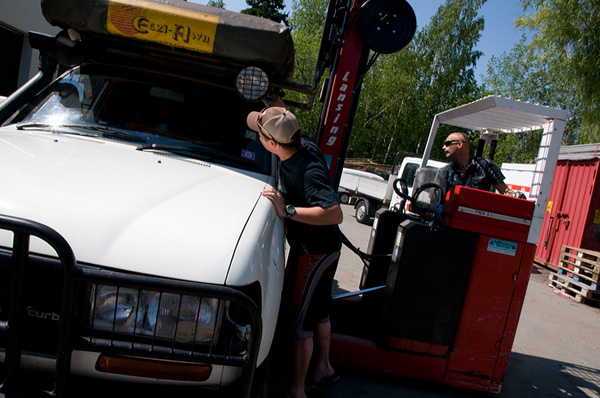 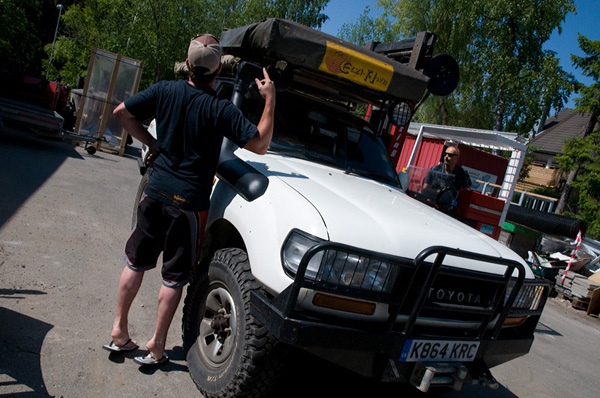 Brian sawed off one of the middle bars in order for us to be able to open the sun roof and get up onto the “sun deck” from inside the car (provided we move one of the sand ladders first).

We decided it will suit us better to have the tent on the back of the roof rack instead of the front. Here Brian is preparing for mounting it later.

The roof tent mattress with a suitable print and a fitted sheet.

Brian transported the roof rack and tent away for storage.

As you can see below, no chance of keeping the roof rack on! Literally a two centimeter margin there. Brian drove the car in slower than a sloth moves and I was jumping around to make sure the sides and the top of the vehicle were clear. It was especially nervous as the back of the car came onto the slightly elevated concrete floor and we were thinking of letting some air out of the tyres to be on the safe side, but it went fine.

Now the car was where it needed to be and we could start with modifications and maintenance. The fridge used to be in between the front seats and the previous owners kept a baby seat in the empty gap in the back. We decided it would be better for us to keep the fridge in the back. It will just be the two of us travelling most of the time and like this it’s out of the way, but we still can reach things in it while sitting in the front. As we moved the fridge there was no center console and no hand brake. Brian swiftly bought a hand brake lever from a second hand car place and built his own center console – drink holders and all. He also mounted two 220 V plugs on the side of the center console so that I can sit and work on my laptop in the passenger seat!

Making sure the base of the center console fits.

The new handbrake, center console and Brian labelling all the wires to rewire everything.

All the original carpeting had been taken out of the car and we decided to put some back in to decrease the heat and noise from the engine coming into the car. Brian bought a soft isolation filter and waterproof carpeting, which is usually used for outside balconies, and it worked great. (He did remove the screwdriver before putting the carpet down. I think.)

We decided to also cover up the entire water tank with carpet.

There will have to be quite a few changes back and forth in the back of the car. To cut down taxes by two thirds we’re planning on registering it as a light truck instead of a passenger car. That requires removing the back seats and putting up a metal net (load bars?) to separate the space. But after putting carpet we test mounted the fridge and the back seats.

Way comfier than his facial expression tells you. The seats are really comfortable and there’s a fair amount of space.

Best back seat driver ever. A little tired at the time though.

The high lift jack that the previous owners had mounted on the side of the roof rack had been stolen along their trip. Here’s the new one that we bought.

Brian decided to make up a new free flow exhaust system to increase power and allow it to run cooler. For a few days he was under the car, getting extremely dirty and swearing most of the time.

It was a seemingly endless battle against rusted bolts.

Checking measurements to see if it will fit.

He managed to get a high performance free flow silencer.

Exhaust pretty much done, after wrapping it in thermal bandage to reduce heat.

Testing to see if the tail pipe will fit, rock sliders back on and all. It’s now sticking out in front of the back wheel instead of in the back as before.

Brian sorted out all the gadgets in front. Starting from the far left there is a four port cigarette lighter hub which has a four port USB hub on the bottom as well. Next to that is the National Luna battery monitor. Above is the remote control for the inverter and next to that the Mad man sensor. (Check the specs page for more details on the gadgets.)

The dashboard and front space before carpeting and gadgets reorganized, while everything was just a big mess…

Most things rewired, gadgets in place again, new turbo pressure gauge (above the steering wheel to the right) and a bit more tidy! Radio still missing though.

It’s been Brian doing most of the work on the car but now and then I have a day off and spend it helping out as well as I can. Everytime I come to the garage and the doors open and there’s the cruiser I get this major rush of butterflies, feeling “I want to go on this trip NOW! How can it still be another YEAR?!”

Here we’ve sanded down the roof rack and are now spray painting it. Looks like new again!

The doors had been stripped of all the normal stuff, handles and all, since the seats had been pushed out as far as possible to allow for more space in the middle. The doors had gotten a bit dirty during the first trip and we wanted to put handles back on there.

New material stitched on and handle in place. Now you can pull the doors closed again! But yes, you still have to reach down to knee level to use the electric window buttons.

I went on a work trip for 10 days and Brian could then spend his evenings undisturbed in the garage without anyone calling and asking when he was coming home. Naturally, I came back to quite a few new modifications and surprises. But I really liked what I saw. The space on the right side in the back before I left looked like this:

And when I got back there were a few things added. So now it’s sorted with two 220 V plugs, axe, torch, fire extinguisher and bags for storage.

He had also got new floor mats. They’re a bit cupped to catch mud and water so it doesn’t run out all over the carpet.

Over the feet space he had installed blue lights! My first reaction was that it will be nice to be able to see that space before getting into the car when it’s been left for a while, thinking of snakes and spiders. For Brian, it’s also just simple joy seeing the lights come on and off.

And this, my friends, is Brian’s pride and joy above all… A good sound system is probably number 2 on his priority list (after a car that takes you where you need to go), while it’s more like number 42 on my priority list. I obviously love good music and preferably with good quality sound, I guess I just didn’t picture it in a rough terrain vehicle. To Brian it’s a necessity, to me it’s a great bonus. So I couldn’t help but laugh when he excitedly ordered me to jump in and close the door and I saw the look on his face when the heavy base of one of his favourite tunes filled the car.

And let me introduce: The book bag! This is where I get to keep the 25 books I’m bringing. Or not. But there will probably be guide books and atlases, and maybe a few paperbacks for me, in there.

The blue lights in the front soon got the company of a few more mounted lights, it’s always good to have light if you have to work on something in the car at night. This is the normal ceiling lights on:

It’s all LED lights. We can just conclude that for whoever sits in the back, it will be BRIGHT and LOUD. But free access to good reading and cold drinks, so quite okay, hey?