When the plan is to drive across half the world pretty much, including some difficult terrain and the absence of decent roads for miles and miles, you need a good car. I did see a documentary once about a retired South African couple who drove through Africa in a Rolls Royce, so it can be done, but I guess they didn’t choose quite the same route as us.

Four wheel drive is a must. It’s also a good idea not to buy a too modern car since they tend to be very computerized and that would make repairing it almost impossible in that little town in the middle of nowhere where your car decided to stop working. 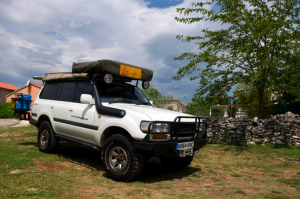 Toyota is a very common vehicle throughout Africa which means there will be spare parts accessible in most places, would we lack something. The Landcruiser 80 series are popular around the world and considered really good cars by Africans, overlanders and people who come to work in Africa.
So with all this is mind the decision wasn’t very hard, since we both grew up with Toyota. (Well, Brian grew up with the type of vehicle we’re talking about here. I grew up with normal passenger cars that rarely touched mud. I’m also slightly less biased when it comes to cars, while Brian has his opinion set. I don’t know how many times I’ve heard him say he’d rather push his Landcruiser than drive a Landrover.)

Since we’re planning on keeping the car in Africa after the trip, it had to be a right-hand drive. Our search started this spring and Brian spent hours and hours on the Internet looking for British landcruisers. Eventually we found the one we wanted – but it was in Croatia. (That you can read more about in this blog post.) One of the reasons why we bought this car was that it had already been out on an expedition before, so it had a lot of the equipment needed.

Expedition equipment and other modifications