There’s something special about setting your own route. Picking your own checkpoints, staying where you want to stay, keeping going when you feel like it. Not having to listen to anyone else. Not getting on a plane and some hours later just be there, but actually having to get there by yourself. I have a favourite poem by Swedish Karin Boye, simply from one single excerpt. To me, it pretty much sums up the meaning of life and freely translated it says that there’s surely a point to the destination but what really matters, what’s really worth the effort, is the journey getting there.

So, we are going waya wayaring. We do have a destination, but how and when we get there is not an enormously big deal. Which is lucky because there are obviously many things  that are out of our control. Such as the political situation in some countries and unforeseen things happening along the way. Therefore, we have only made a vague route plan which we will update and specify closer to the trip, once we know what’s going on in the world at the time.

Our original route would have taken us through Syria but because of the situation there we have had to make a new plan. As of now, it looks like we will be shipping the car across (and going with as passengers on the ship) from Italy to Israel (which means we need double passports). Another option could otherwise be to ship the car between Turkey and Egypt and fly across ourselves but that’s plan B right now.

Here’s a map of the route we’re thinking of for now and a brief description of the trip we want to make, but it might just as well change another 14 times before we head out! 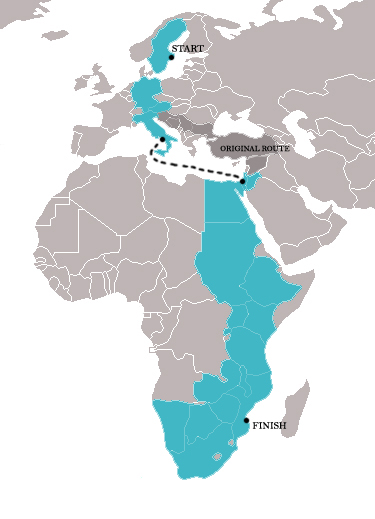 Starting in Stockholm we’ll then go down pretty much straight south through Europe. Following our original route we would have gotten to see much more of southeastern Europe but we’ve had to cut most of those countries out unfortunately, due to the situation in Syria and route changing and the fact that we’re struggling to reach our budget. However, going to Israel still means we can visit Jordan, which we’re happy about.

Coming into Africa, Egypt is obviously a must-see. We’ll then head south – who knew there are also pyramids in Sudan? Brian is planning on some fishing in the Nile before we come into East Africa and Kenya. After visiting Kenya we’ll turn west around Lake Victoria (where Brian is also planning on fishing of course) to visit Uganda and Rwanda and hopefully see some mountain gorillas.

We’ll then go back east into Tanzania, maybe all the way out to the coast for a trip to Zanzibar. After that there’s little Malawi and great Zambia. From there we will head into Brian’s homelands: Zimbabwe. However, not stopping there – we haven’t covered all of southern Africa yet. So we’ll continue through Botswana to the Skeleton coast in Namibia, before rounding South Africa. Heading back north we’ll be on our last leg before the finishing goal: Vilanculos, Moçambique, where Brian’s family is waiting for us.

Update April 2013: Up in Europe we made the decision to go from Germany via Prague in the Czech Republic to Austria. As we were waiting for the departure date for our ship from Italy we also visited Slovenia and Croatia. In Kenya we made the decision not to go to Uganda and Rwanda as planned due to the Ebola outbreaks and political violence in the area and also because of our deadline. Looking forward to visiting those countries another time. In the end of the trip we made a brief visit to Lesotho from South Africa and also drove through Swaziland into Mocambique.